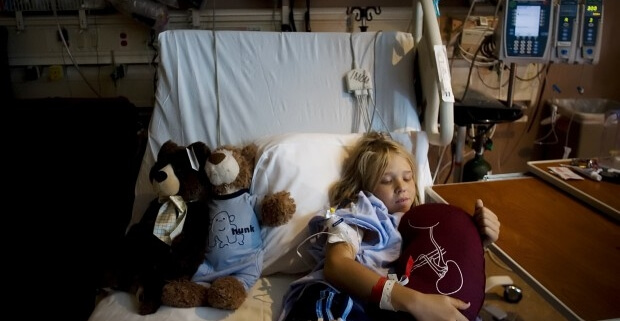 How do you pray for the life of a girl if it means someone else has to die?

As the family of 13-year-old Aubrie Johnson waited for word of a kidney donor on a recent Saturday, they revisited questions they have long wrestled with during their twisting and turning lives. All the while, they kept the news of a possible donor hidden from Aubrie, who was hamming it up during Kidney Kamp at Aspen Grove near Sundance. The call had come in earlier that morning, but there were still a battery of tests that had to be run.

While the family tries to treat her as a normal kid — she earned herself a spot on the cheerleading squad — there are some hopes they don’t want raised too high. On occasion at the camp, Aubrie would wander too close to the conversation and the topic would subtly change or a family member would find something else for her to do.

But as they waited for that last confirming call, there were unmistakable sideways looks and smiles.

“I’ve seen a miracle once. You can always hope for two,” said her mother, Wendy Johnson.

It was on a family trip when Aubrie was just 22 months old that they noticed she was getting “puffy.” They figured it was a bad reaction to a bee sting, but it didn’t seem serious so they continued on their trip. But on the drive to southern Utah it go so bad they had to buy shoes an extra size larger just so she could walk around without pain. It was at that point they went to a hospital. After a number of tests, a cause was pinpointed.

“The doctors came in and said her kidneys were toast,” said her father, Kevin Johnson.

The kidneys are fist-sized organs that filter about 200 quarts of blood per day in adults, creating about 2 quarts of waste that is excreted as urine. When the kidneys begin to fail, signs such as swelling, excessive fatigue and muscle cramps start to appear. Kevin, built like an ox, had to watch helplessly as doctors worked on his little girl.

Doctors in Salt Lake City got Aubrie on medications and dialysis, a process that extracts waste from the body artificially. For two months she stayed in the hospital. It was a summer at what Aubrie’s three sisters call “Club Med,” where they raced wheelchairs down the hallways their parents were pacing.

And then the first miracle happened.

Preparing to take the 2-year-old out of the hospital and into a life of dialysis, a nurse suggested to the doctor that they try weaning her off the system. Bit by bit they took her off the machines, and bit by bit her kidneys took over –well enough to go home dialysis-free.

A reprieve, and then …

For several years, the family lead a relatively normal existence. Kevin got a promotion, and they all moved to Nebraska. But as Aubrie got older, her kidneys started failing again. Treatment at the hospital was a five-hour round trip, and it started taking a toll. When a position in the company opened up in Salt Lake City, the family packed up and headed back to the Wasatch Front where they would have quicker access to medical care.

At age 6, trips to the hospital weren’t enough, and Aubrie went permanently on peritoneal dialysis. It works, in her case, by hooking up a machine to an exit point on her stomach. The machine uses the lining that surrounds the stomach and spleen as a natural filter to clear out the waste and excess fluid. Aubrie has learned to sleep through the noise, including the alarms that go off when an adjustment needs to be made. Wendy, on the other hand, says it’s like having a newborn. (“I sleep through church,” she says.)

The dialysis also rules out things (theoretically speaking, of course) like ice cream and swimming. She’s had several bad infections that double the trouble, because the medication used to take care of the problem is bad for kidneys.

At Kidney Kamp, one of her sisters said they try and make her life as normal as they can. “I didn’t want her to be known as a sick kid,” said Breanna Johnson. “We give her just as much crap as the next person.”

But there’s no getting around the special care Aubrie has needed for the past seven years — and the side effects. “Ew! There’s blue jean all over it!” the 13-year-old says when her mother takes a number of pills out of her pocket for her to take.

Aubrie is the size of an 8-year-old, because kidneys are intimately tied to growth hormones. As the kidneys fail, so do the messages to grow. While this makes it easier for members of her cheerleading squad to hoist her in the air, it presents its own unique challenges.

This year a teacher at her school stopped her, telling her she was in the wrong place.

“He told me, ‘The elementary is across the street,'” she said.

The family put off getting on the transplant list as long as possible for several reasons. First, the dialysis was working well. Second, the longer they waited, the better chance there was of medicine improving all aspects of a transplant. Third, in Aubrie’s case, a new kidney isn’t a cure, it’s a treatment. Once a transplant is complete, she can expect to get about nine years of use out of it before needing another one.

Last November, though, Aubrie was fed up with the dialysis, and the little bit of her kidneys that still worked was starting to fail. So they got her on the donor list and were shocked to get a call within a couple of weeks. Because of the nature of transplants, families have mere hours to accept the organ and be available for the operation, or it’s given to the next available person on the list.

Aubrie was getting cleaned up and into her hospital gown when the message came down: the donor kidney had failed the last test. It was too risky. Over the past nine months, there have been several other close matches, but for a variety of reasons, it never worked out. Aubrie and her family pushed on.

“She’s not scared of it,” said her sister Breanna. “I think it’s from when you stare death in the face and say, ‘That’s too bad, I’m living.'”

At Kidney Kamp, Aubrie and her sisters were just warming up for a shot at the karaoke machine when the call came –it was a go. But the precocious teen wasn’t quite ready to go. Karaoke is a favorite, and the camp gives her a chance to flourish among people like her. So the family asked for and received an extra hour before they had to be in the hospital.

That Saturday night was a long one, spent waiting for another kidney transplant and a heart transplant to finish up in the operating room. They passed the time in the hospital chapel, and finally it was their turn. Four hours later the kidney that belonged to someone who was now dead was starting to do its job inside Aubrie.

“You know somebody has given their life, but at the same time, they’ve given new life,” said her father.

Aubrie has a long road to recovery, and will always have to take anti-rejection medication. But as a Provo family can attest, the benefits are almost immediate.

Fourteen-year-old John Kiefer got a new kidney –from his older sister Jennie — in May. John’s growth had also been stunted by kidney problems, but since the transplant he has grown 2 inches and put on 20 pounds.

“They say I’m taller and I look better,” said John, who started to notice the little things in life that others take for granted, like being able to sleep on his stomach at night instead of on his back for dialysis.

Families are often a source of donor organs, like in John’s case. In Aubrie’s case, there wasn’t a match, even after her dad lost 100 pounds to get within testing parameters.

Aubrie’s new kidney came from a 27-year-old donor and it’s used to being in a much larger, older body. She will be in the hospital until the kidney learns how to function in a smaller frame. After that, she will go back to the hospital to be monitored twice a week for the next two months, and then once every two weeks. Once doctors believe she is well enough, they will check her once a month, for the rest of her life.

Even though Aubrie is stuck in a hospital recovering, she’s already enjoying life with the new kidney.

She got to treat herself to a hotdog this week in the hospital cafeteria. Hotdogs were a no-no while she was on dialysis because they contain high amounts of phosphorus and salt. She could eat only part of one before the transplant.

When asked what she is going to do now that she couldn’t do before, she shrugged and said, “I haven’t planned it all out yet.” A moment later, she thought of something. “Take a bubble bath.”