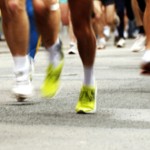 But the way that the 30-year-old father muscles through the pain, fatigue and frustration of kidney failure makes him a hero to those who love him.

“He’s my role model,” said his mom, Bobbi Kirk. “It’s really hard for him. He goes to dialysis in the morning (Monday, Wednesday and Friday) and is there until 9 o’clock and then he goes straight to work. The (medical) people tell him that most people go home and go to bed because they’re so worn out after dialysis. But he goes and does a very physically demanding job. He’s an amazing person.” And if there is anything the world needs, it is more amazing people.

“It’s going to take a miracle to get him a kidney,” said his mom. “So building awareness is how we’re doing it.”

Because Jace Kirk has had a blockage from birth that led to his kidney failure, his family has been fundraising for medical procedures for most of his life. This Saturday they’ll host and participate in the Kidney for Kirk Hero Dash 5K in St. George. Participants can dress up in costumes — or not — and run 3.2 miles to help the Kirk family cover medical expenses and raise awareness about organ donation.

“The response has been overwhelmingly good,” said Bobbi Kirk. “It’s very refreshing to know people out there care about people they don’t even know.” A local radio station airs ads about the fundraisers, and when it does, Bobbi said she gets calls from people about how to sign up to be an organ donor. She knows firsthand what it’s like to be a donor because she gave Kirk one of her kidneys when he was 16.

“We knew when he reached puberty, he would need a transplant,” she said. “He was able to use it for 12 years, but he’s been on dialysis since 2010.” Kidney transplants usually last 10 to 15 years, but in Jace’s case, his body also began producing antibodies that made it difficult for him to accept a donation. His blood basically fights most other tissue types, his mom said.

Which is why the family is now praying for a miracle.

And while they hope for the best, they work to educate others about the value in organ donation and how to go about becoming a donor.

“To me the awareness, bringing this issue to the community, is so wonderful,” she said. “There are so many people on transplant lists and people need to be aware of how they can help.”

In Kirk’s case, his cousins already started a race series that each focused on different charities. Skyline alums Reza Pazooki and StevieAnn Nance co-founded the Flash Dash series with a race in Sugarhouse Park in December of 2012. Pazooki’s sister, Jackie Rock, asked if she could participate, and they made her a partner in February 2013. Their goal with the series was to hold races that benefited charities.

“The idea of being a part of something where the focus is about benefiting the community as a whole was really appealing,” said Rock, who is a mental health therapist in Utah. “It’s not about competition. It’s about coming together as a community for a common cause. It’s about helping yourself and helping each other.”

The Kidney for Kirk Hero Dash on Saturday, March 30, will be the first of the 5K series here in Utah, but they’ve already scheduled two others. The Dodgeball Dash in Sugarhouse Park on April 13 will benefit Best Friends Animal Shelter, and the Dodo Dash on May 4 will benefit the Utah Food Bank.

Each of the races will be capped at 1,000 participants, all of whom pay $25 to run. There are always extras, mostly provided by sponsors, who support the idea of giving any and all money raised by the races to the respective charities. Each racer will receive a race bag, but T-shirts are optional. Sponsors fill the goodie bags and offer prizes that are designed to match the theme of each race. Kids 11 and under are free, so families can do something healthy and emotionally uplifting together.

“We loved the idea of being able to donate all of the money to charity,” Rock said. “We wanted this to be a great experience for runners. But we wanted them to feel good about contributing to something worthwhile too.”

Bobbi Kirk is thrilled that Kirk’s race will be part of the Flash Dash Series, and she hopes that not only will it help her son, his wife and their 3-year-old son Trevin, financially, but that it also might move others to find out how they can help those suffering from organ failure.

“That’s really what we want, to raise awareness,” said Bobbi. “People want to help.” And hopefully, on the day before Easter, people will want to take some time to run a few miles for a young father and a great cause.

Ruth Stopped Dialysis on 2/4/2013 How Long Will You Live? Pee in a Cup to Find Out.
Scroll to top