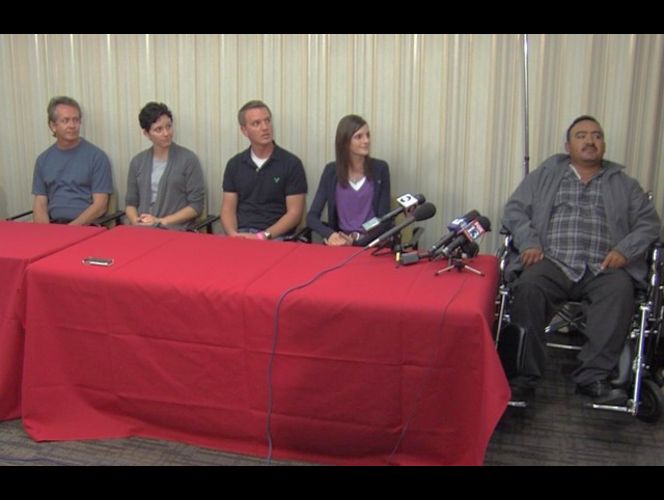 3 receive kidney transplants in a chain of giving

SALT LAKE CITY — Three people are recovering after receiving new kidneys. What makes their medical procedure so incredible is the connection they share — living donors who came together as part of a paired transplant exchange.

“The people who have stepped up to save my baby’s life, it’s been amazing,” Fershtut, of Layton, said through tears.

When Beckham was born, doctors discovered his kidneys did not fully develop and were functioning at just 12 percent of what they should be.

“He had a window of a couple of months that we needed to get this done in order to avoid having to put him on dialysis,” explained Dr. Raoul Nelson, a pediatric nephrologist at Primary Children’s Medical Center.

Since the surgery Sept. 11, the little boy is doing so much better, according to his parents.

“He couldn’t walk before. He couldn’t keep any food down before,” said Beckham’s father, Ari Fershtut, “and now with this new kidney, he should be able to live a very normal life, be able to catch up and walk and run like other kids and go outside and play with them.”

The surgery was dream come true for Beckham’s parents. Ari Fershtut was going to donate a kidney to his son, but they were not a match.

Related Story
Doctors, patient celebrate history-making double transplant surgery
Doctors at Intermountain Medical Center are celebrating a first: a heart and liver transplant in the same patient, during one operation. It’s the first transplant surgery of its kind in the state of Utah.
The toddler’s kidney came from Kristy Buffington, of Twin Falls, Idaho. The 37-year-old wanted to donate her kidney to her friend Brandy Jess, 40, but last-minute tests showed they weren’t a match.

“So I decided to donate to her, and then we came down (in July) and the final cross-match said we weren’t a match, that the first test was actually wrong,” Buffington said.

They were ready to turn around and go back to Idaho when Buffington said they were approached about the paired exchange program. She told doctors she was willing to do the paired exchange only if there was a guarantee that her friend would receive a kidney. After a couple of weeks, matches were found.

Even though Buffington wasn’t a match for Jess, she’s happy she was able to help a little boy.

“It was really awesome to be able to help this little guy at the same time,” Buffington said. “He’s only 2, so that was pretty cool, too.”

While Ari Fershtut, 32, was not a perfect match for his son, he was a match for Juan Romero, 45, of Wendover, who waited three years for a transplant and had been on dialysis. Both men had the same rare B-negative blood type.

Now, he has a new lease on life, thanks to people he had never met before.

“I’m just grateful I got to help my son, but also help (Romero) as well,” Ari Fershtut said. “It’s a bonus on top of that. It’s great that I got to be a part of it.”

Bartling’s gift began a chain reaction that resulted in three people receiving a kidney. His went to Jess, Jess’ friend Buffington was a match for 2-year-old Beckham Fershtut, and his dad, Ari Fershtut, was a match for Romero.
Their surgery was performed Sept. 12.

Jess’ transplant exchange was made possible by Ted Bartling, 51, of Morgan. He is known as the good Samaritan in the exchange because he has no relation to anyone else involved.

“I’m just some guy off the street that had a weird idea that I would go in and see if I could help somebody other than myself,” Bartling said. “I just knew there was someone that matched.”

It took six months of testing and looking for a match, and then the hospital called him to say they found someone he could help.

Bartling said he was feeling great six days after donating a kidney. He had no idea who would receive the kidney, but after the surgery he met Jess.

Buffington said her good friend is making progress and the two of them share a much stronger bond, even though Jess didn’t receive one of Buffington’s kidneys.

“She is kind of having a rough time of it, but she will make it,” Buffington said. “She is an amazing person. She’s got a good, positive attitude, so she will get there.”

But Bartling’s gift began a chain reaction that resulted in three people receiving a kidney. His went to Jess, Jess’ friend Buffington was a match for 2-year-old Beckham Fershtut, and his dad, Ari Fershtut, was a match for Romero.

Enlarge image
Two-year-old Beckham Fershtut received a kidney from Kristy Buffington in a paired transplant exchange last week. His father, Ari Fershtut, wanted to donate his kidney but wasn’t a match. (Photo: University of Utah Health Care)
“And that way we were able to build a chain and take two incompatible pairs plus a non-directed donor and transplant three patients,” said Dr. Jeffrey Campsen, who performed all three surgeries on the donors.

University Hospital was the location where all the kidney donors had their surgeries, along with two recipients. Primary Children’s Medical Center was where the surgery on 2-year-old Beckham Fershtut was performed.

Ari Fershtut said the whole process was a great idea.

“Instead of helping one person, six (people’s) lives are affected, and it’s a wonderful blessing,” he said.

Bartling said donating a kidney has been life-changing for him, a chance to give back for what he has.

“We really do have to help each other, to make society better, and we have to give more than we take on occasion, and that is how I got to be here. I wanted to give more than I take,” Bartling said. “It’s such a great feeling, just to help.”

As a long-time practicing physician, I am well-versed on the perils of kidney disease — both academically and anecdotally — so anytime I come across new research urging people to pay attention to the kidneys and kidney disease, I feel compelled to spread the word. Most people know very little about kidney disease, and it’s time for a light bulb moment (and not just a flicker), especially in light of new research that just came out in the National Kidney Foundation’s American Journal of Kidney Diseases.

The American Journal of Kidney Diseases report found that the lifetime risk of moderate — or worse — kidney disease was 59 percent, a risk that outstrips invasive cancer or diabetes. Talk about an eye-opener. As a result of this new research, the National Kidney Foundation recommended that all Americans over 60 should be screened as part of an annual physical. Around the same time this research came out, another group estimated that the government’s tab for treating kidney disease was close to $60 billion. No, that “b” wasn’t a typo.

Taken together, these separate announcements about the scope of kidney disease represent a clarion call to action: We, as a society, need to take kidney disease — which kills more Americans than breast cancer and prostate cancer combined — seriously, or the human and financial costs may become unbearable.

Kidney disease isn’t a hot topic. It’s hard to see and “feel,” particularly at the early stages, and it tends to prey on those whose health is already vulnerable, such as those with diabetes or high blood pressure and seniors. Some even chalk kidney disease up to “an inevitable part of aging” and just ignore it. But that is a naïve and dangerous view.

Kidney disease is significantly underdiagnosed. Screening is cheap, simple and non-invasive: A doctor only needs to perform a quick urine test for excess protein (albuminuria). Usually invisible to the human eye, too much protein in the urine is one of the earliest signs of kidney damage. Unlike colonoscopies or other expensive (and invasive) health screening tests, on average this lifesaving urine test costs less than a tank of gas, but despite its low cost, there’s a widespread lack of testing, even for those at greatest risk. The earlier kidney disease is recognized, the easier it is to treat. Sometimes, simple lifestyle interventions are even enough to keep the disease from progressing.

The kidney is an incredible organ. Kidneys process waste in the bloodstream, produce key hormones and help the body regulate everything from blood pressure (by controlling sodium levels) to muscle-building (by controlling protein absorption). The kidneys wear many hats and unfortunately many people take them for granted until they aren’t working properly. Risk for kidney disease can be reduced by properly managing conditions that damage the kidneys — such as high blood pressure and diabetes, and maintaining a healthy lifestyle and avoiding medications that can harm the kidneys. Once the kidneys are damaged, they begin to work less effectively, and eventually if the kidneys fail, treatment requires a transplant or dialysis. Kidney disease also puts patients at increased risk of heart disease.

But ignoring the kidneys, or assuming that there’s nothing that can be done to prevent kidney disease and its progression, fails not only patients who already have the disease, but everyone else at risk. Kidney disease is not a tragic, untreatable disease. We have many tools at our fingertips to combat it, from dietary interventions to improved treatment of high blood pressure and diabetes. But we can’t use those tools if we don’t know who has suffered kidney damage. One easy way to find out is by speaking up and encouraging your primary care provider to perform this simple urine test for albuminuria. Take this handy kidney checklist with you on your next doctor’s visit and share it with your friends and family.

If you’re over 60, or if you have a family history of kidney failure, diabetes or heart disease, please get screened for protein in your urine during your next annual physical. And don’t stop there. Reduce your risk by controlling blood pressure and blood sugar, maintaining proper weight, stopping smoking, exercising regularly and avoiding excessive use of medications that can harm the kidneys, such as ibuprofen and naproxen.

Widespread awareness is not built overnight (after all, it took Thomas Edison some time to distribute electricity) but let’s at least start by turning on our own lights. Because unlike the fictitious monster under your bed, when it comes to your kidney health, sometimes what you can’t see can hurt you.

Have questions about this research or the new recommendations? Just ask in the comment section below.