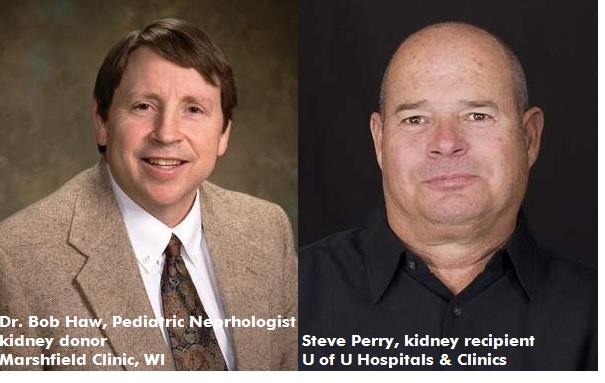 MARSHFIELD — Marshfield Clinic pediatric nephrologist Dr. Bob Haws has counseled families about kidney donation for years in his medical practice. Since becoming a kidney donor himself, Haws said he can now speak from experience about making a life-saving gift.

Haws had supported and counseled his brother-in-law, Steve Perry of Salt Lake City, for years while Perry battled kidney disease, but when Haws learned in March 2011 Perry would soon need dialysis, he started the donor evaluation process.

“I felt a spiritual drive, that this is what God would want me to do,” Haws said.

He said Perry might have had to wait two to seven years for a transplant, a time period many patients with kidney disease don’t survive.

After undergoing blood tests and human leukocyte antigen tests, Haws learned he was a three out of six match with Perry — a very compatible match usually seen between parents and children. The transplant surgeries were scheduled for Oct. 11, 2013, at the University of Utah Hospital where Haws had attended medical school.

“It really came out of the blue when he said he wanted to donate,” Perry said. “When I married his younger sister 40 years ago, if someone had told me he’d be giving me a kidney, I’d have laughed them out of the room, but things have a way of changing.

“There’s really no way to tell how much gratitude there is,” he said.

Perry’s quality of life has improved dramatically since the transplant. Before receiving his kidney disease diagnosis, he regularly bicycled up to 100 miles in a single weekend. A month before the transplant, he struggled through a 5K walk for the National Kidney Foundation and would become fatigued doing his job repairing medical equipment.

Perry returned to work about three and a half months ago and said he’s looking forward to participating in cycling events with this son this summer.

Haws’ recovery also went smoothly — he was out of the hospital in three days and back to work in seven.

“It’s not as big a deal as I always thought,” he said. “I can still go skiing and do normal things.”

Haws said becoming a donor has made him feel closer to parent donors and has helped him counsel them through the process. Many potential donors fear having only one kidney will impact their energy levels, ability to work or ability to have children, he said.

“I tell (potential donors) the anxiety about donating a kidney shouldn’t be there, but now I can speak with authority about it and be more sincere when talking to parents,” Haws said. “I want people to know donation is a wonderful, loving act of kindness.”

March Is National Kidney Month: Let’s Get Back to Basics Curious about becoming a Kidney Donor? Or donating a Kidney Kar/Car in Utah...
Scroll to top