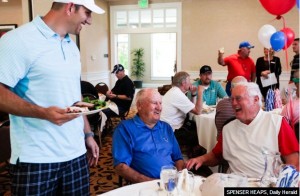 He hasn’t represented the BYU football team on the gridiron for more than 13 years. He wasn’t even officially representing the Cougars on the golf course Monday at Hidden Valley Country Club.

But in the 26th annual Liberty Mutual Invitational charity golf tournament benefitting the National Kidney Foundation of Utah and Idaho, Hall-of-Famer LaVell Edwards proved that — even at 83-years-young — he still knows how to win.

Edwards was joined by Derek Roney, Ryan Rice and Richard Watson to shoot a 58 in the scramble-format competition, edging out the next two teams by one stroke.

“We had one guy who could hit it a long way and he was very accurate,” Edwards said. “That really helped, but then we made a lot of 10- to 15-foot putts, which you don’t normally make. It came down to the last putter on two or three of them and the guy made them. I think that’s what did it.”

Deen Vetterli, the CEO of the National Kidney Foundation of Utah and Idaho, said it was a spectacular result.

In a year where football camps kept BYU’s Bronco Mendenhall and Utah’s Kyle Whittingham from participating, Edwards turned out to once again step up to make the event memorable for the many generous participants.

He just smiled when asked about his contribution on the course.

“I can’t hit it very far now but I made a few putts, which is the only thing I did to help,” Edwards said.

He said he’s still healthy, but he gets tired.

“There were a few holes I didn’t play, but I putted,” he said. “I putted pretty good though. The heart’s good now. If I had a back and hip and feet that were better, that would be all right.”

Vetterli said that in the 26 years that the Kidney Foundation has put on the tournament, no one has done more to ensure its success than Edwards.

“I can’t tell you how important it is for us to have LaVell Edwards with us,” she said. “He has single-handedly helped us achieve the kind of public relations and credibility that we have had since this began. Everyone knows him and he is so gracious and kind. He’s the foundation and the strength of this tournament.”

Vetterli recalled a special event the Kidney Foundation put on 10 or 15 years ago in which they brought in a number of fellow coaches from all over the country to honor Edwards.

“He came up to me after that event and said that if there was anything he could ever do for us, let him know,” Vetterli said. “He’s done it ever since then.”

While Edwards stole the show, BYU and Utah still had teams of (some) former football players officially taking Mendenhall’s and Whittingham’s places representing the schools.

And, as is usual in the “Rivalry for Charity” event, the two teams didn’t see eye-to-eye on how things went.

“You (BYU) don’t have a full squad because Hans Olsen had a cramp issue,” said former Ute quarterback Frank Dolce, who organized the Utah foursome. “And there was an illegal substitution as well.”

Ex-Cougar defensive back Ben Criddle fired back: “We had a substitution, but you have to view this as a little bit of a disqualification. He (Dolce) doesn’t have any former football players on his team. He’s the only football player on that squad and that was the original rule.”

Vetterli said that type of thing is just what the tournament has come to expect.

“When Ron (McBride) and LaVell played, they were always doing wild things,” she said. “We were almost afraid to look. McBride couldn’t believe it when he found out LaVell had won this year. Those two guys are so great, so that was fun.”

The other two BYU representatives turned out to be former Cougar linebacker Bryan Kehl and ex-BYU tight end Carlos Nuño.

The end result Monday was a tie (both foursomes shot a 67) and thus they both ended up “singing” a garbled rendition of the other team’s fight song.

“They were such good sports about it and such nice guys,” Vetterli said. “Several of them came up afterwards and said thanks for the opportunity. It was fun to have them sing those songs, even if you couldn’t understand them.”

Overall, Vetterli estimated that the charity tournament would raise somewhere around $60,000 for the Kidney Foundation to use to help those dealing with kidney disease. She said that she feels fortunate to be able to see those donations turn into life-saving aid.

“I talk to my staff about anyone who gets tired or it gets difficult like any other job,” she said. “But we get five or six letters per week from patients who say, ‘You literally saved my home’ or ‘You literally saved me from having to go on dialysis.’ By far the most fulfilling part of my job is signing those checks that go directly to the patients. That’s the most exciting part to be able to do that because we can really see that we’re making a difference.”