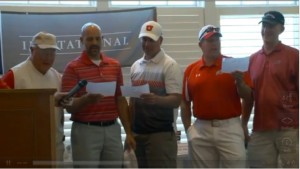 SANDY, Utah — The rivalry between Utah and BYU was back on the golf course for the Liberty Mutual Invitational at Hidden Valley Country Club, which benefits the Kidney Foundation.

Former Utah quarterback Frank Dolce captained the Utes team against former BYU football players Hans Olsen, Ben Criddle, Bryan Kehl and Carlos Nuno. Both teams made birdies on their final holes to end up tied at the end of the match.

So, both teams had to sing the other school’s fight songs, along with former BYU coach Lavell Edwards and former Utah Coach Ron McBride.