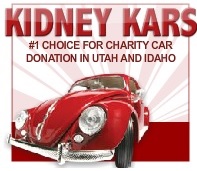 Just for fun today, I counted up the number of car donations and the amount of money that I personally have helped the National Kidney Foundation of Utah & Idaho raise through the Kidney Kars donation program ( www.towkars.org) . I started the Kidney Kars program the first year I came to the NKF of U & I and the same year I graduated college in 1991. It was one of the first 5 charity car donation programs in the entire country.  I asked my best friend, Simeen Brown, an illustration art major (at the time) to create the artwork for the ads.  She helped me come up with the 1-800-tow-Kars phone number. I started by putting a free ads and flyers in the Provo, American Fork, Bountiful, Farmington, Ogden and Salt Lake City Utility Bills and city newsletters. Later Zion’s, First Interstate Bank, and Wells Fargo agreed to put our Kidney Cars flyers into customer statements. These efforts reached over 1,000,000 Utahns and pretty soon the phones were ringing off the hook.  Previous to the Kidney Kars car donation program YOU had to pay someone to come take your old car away. So, in two states like Utah and Idaho, famously frugal, financially literate, fiscally conservatives– the idea of free towing coupled with the tax deduction went over like wildfire.

So there I was, a young  fresh faced girl, just 23 year old and barely out of college hoping to change the world by towing away junk cars.  I drove my 1981 silver VW Diesel  Rabbit  to visit and contract with every wrecking yard in every corner of Utah and Idaho.  I put over 20,000 miles on the rabbit that year, and then donated the next year to Kidney Kars with about 285,000 miles on it. (I replaced the rabbit with a 1990 VW Golf GTI).  In an industry (towing, wrecking yards, scrap metal) where integrity, charity, and ‘environmentally friendly’ were laughable ideas, I  somehow talked them into PAYING  US– the Kidney Foundation– for a steady stream of  donated cars (and to tow them away for FREE).  I cut contracts with agencies whose ‘service center’ consisted of  guys shirtless under their overalls, missing teeth, chewing a toothpick with a vacant look in their eyes.  With the money I got them to pay us for those car donations, the NKF of U & I  was able to fund the first life saving financial aid/patient services programs and began funding local medical research. It was a miracle.  At the time,  the price of scrap metal was $30 a ton (today it’s more in the $225-350 range). So we were getting between $30-$75 just for junk cars.  The third year of operation, a doctor from Sandy, Utah donated a 1963 Mercedes 250 SL convertible with red leather interior and white wall tires.  We got England Trucking to haul the car down to the Barrett-Jackson Auction in Scottsdale for free.  The auction donated the sales space and fees.  We made $17,600. This single-handedly funded two years of the Kidney Patient Educational Scholarship program (for young adult/ pediatric Kidney Transplant recipients).

It’s weird how I got my motivation and experience to make money for charity by selling used cars.  I grew up in East County Southern California with a dad who LOVED cars– Baja bugs, dune buggies, and  race cars.  He was fond of German engineering and diesel engines. Our garage was bigger than our house and it’s where he spent most of his time. We had no less than 8-10 running cars at any given time. It was my job to change oil, make sure there was water in the battery caps, that the cables were connected, the idle adjusted, and that there was correct air pressure in the tires.  I also washed and detailed (vacuumed under seats and shook rugs, Amour All-ed the seats/dash/tires, Windex-ed the windows inside and out, chamois dried the body, and then hand waxed) at least 3 cars every Saturday before I could even THINK about asking to do something fun.  But not until I’d assisted my dad further (usually overhauling an engine or transmission) by cleaning his car parts in an open pan of gasoline, and then using a wire brush to scratch off the oily gunk.  I got $4.00 per car per full detail,  plus a little extra for the garage assist. Today, a detail job like that will run you $60.00 a car.

My favorite cars were my Dad’s  Diesel Mercedes 250D, a Porsche 911 and a Porsche 935 (a Candy Apple red, Turbo Carrerra).  My Dad is dead now, so I can say this out loud.  But one night when he was away (during a full moon) I drove the red Porsche East on Highway 8  through the Ocatillo Desert and the Imperial Valley.  That car easily traveled at 120 mph without even engaging the turbo. It was an amazing machine.  But, in spite owning an extra Porsche,  I was given a 1967 pieced out VW Bug  to drive. It had 3 different colored quarter panels. “Pretty girl, Ugly car” is what my Dad always said. We lived on 5 acres of dusty granite with a few horses, and a LOT of cars. That’s how it was.

My first taste of fundraising was at  BYU (Provo, Utah).  I started the first on campus Woman’s Rights group “Voice”– which I had to help keep funded to keep it alive.  Additionally, I worked in the library as a research/reference assistant and helped professors get their grants so I could have a job. After college, a good friend told me his Mother (CEO, Deen Vetterli) was trying to start a fundraising program selling donated used cars.  It was the perfect segway between my experience in grant writing and fundraising and a history of working on old cars and being comfortable haggling prices with wrecking yards.  By starting the Kidney Kars program, I imagined every wife and daughter in America (whose husband or dad had  8 cars parked around the house)  breathing a collective deep sigh of relief.  Finally!  A tax deduction and free towing as an incentive to get rid of all those cars parked out back. In fact one of the first huge car donation projects publicized on all the news channels, was when a 80 year old retired car dealer in Sunset Utah was given a notice by the city to get rid of his rotting inventory parked out back. He had 40 cars on his property and no way to get rid of them ( http://www.deseretnews.com/article/624713/Foundation-hits-gold-40-old-cars-in-the-mud.html?pg=all). It was huge and together with all the community and municipal support and the Governor’s appointment of the Kidney Kars program to the “Take Pride in Utah” (Utah’s Statehood Centennial Celebration) Kidney Cars and Kidney Kars hit pay dirt and kept on rolling along.

So many generous people have given us their Kidney Car/ Kidney Kars charity car donation in Utah and Idaho. Many, many people repeated their car donations time and again (up to 5 donations in 10 years) just for the tax deduction and the free towing. Even with the changes in the tax law that limits the amount that can be claimed on their taxes, and even the Cash For Clunkers incentive–  Utahns and Idahoans have continued to generously give the Kidney Foundation their ‘Kidney Kars’ charity car donations. Such generous, decent people in Utah and Idaho. I pledge allegiance to Utah for giving my weird skill set a purpose and my deepest car related neurosis a therapeutic outlet.

I have personally overseen every single aspect of the National Kidney Foundation of Utah & Idaho’s Kidney Kars / Kidney Cars donation program (1-800-Tow-Kars and the development of www.towKars.org). I am proud to say, we have received and sold more than 92,000 vehicle donations and raised over $20,000,000 dollars on behalf of Utah and Idaho Kidney Patients.

Kidney disease and dialysis are so miserable for so many people. I have made and lost so many friends to Kidney Failure since 1991.  How can I thank the Kidney Foundation enough for giving me a meaningful little place in the world to help save lives and help lighten the burden and improve the quality of life for Utah and Idaho Kidney patients?

I can personally assure you that your Kidney Cars/Kidney Kars donation in Utah and Idaho is put to amazing good use locally.