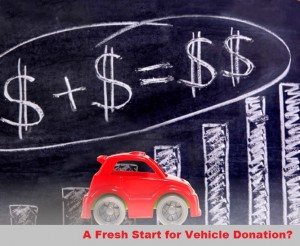 On July 25, important bipartisan legislation was introduced by two

dozen members of the House Ways & Means Committee, which
oversees the federal tax code and the rules governing charitable
giving. The new bill would fix a problem — created inadvertently
by an otherwise commendable package of 2004 reforms — that
has caused a sharp decline in vehicle donations.
The current issue is one of transparency, or lack thereof. For a donated vehicle
worth more than $500, there is no way for a prospective donor to know the tax
consequences of the gift in advance. Every other method of vehicle disposal
has some certainty upfront, which has discouraged donation as a viable option.
According to the Internal Revenue Service, vehicle donations nationally have
dropped by 80% since the 2004 changes.  H.R. 4960, also known as the Charitable Automobile Red-Tape Simplification
(CARS) Act, would restore the timing of vehicle valuation to the beginning of the donation process, ensuring the donor can make an informed decision. This change would help charities across the country improve the volume and value
of items received through their vehicle donation program. The CARS Act would still allow a deduction for the fair market value of vehicles worth up to $500 and certified appraisal over the $5,000 threshold. Between those amounts, the valuation would be determined by an authorized online service (such as Kelley Blue Book), with the charity verifying through
an inspection of the vehicle’s physical condition. That would yield certainty for the donor while preserving the important tracking and enforcement objectives of the 2004 reforms. As of September 1, the coalition working to push this bill through Congress had secured 135 cosponsors, including 28 bipartisan members of the congressional tax committee. You can also join the many other charities working together with our informal coalition to enact this legislation by contacting us.

To whom it may concern,

Thank you so very much for once again accepting my request for a scholarship. You guys are truly amazing! I am so grateful for all that you have done. I am in my third semester here at SLCC, I am almost finished with my pre-requisites to get in to nursing school. I will be able to apply next fall. I hope I have exceeded expectations you had for me. I can honestly and proudly say that I have exceeded my own expectations I had for myself in college.

Once again, I thank you so very much. Because of all my kidney problems and my transplant, the National Kidney Foundation will always have a special place in my heart for all that you do.