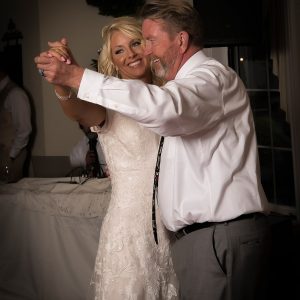 Madalyn Edwards and her father, Rob Deklerk share a lot in common. They are both big Utah Jazz fans, they both served LDS missions in Japan and as of Feb. 13, 2018, they have shared a kidney.

“I just love my dad so much that I would literally give my life for him, and I mean that,” Edwards said.

Deklerk successfully received his daughter’s kidney earlier this month — 40 years after his first kidney was removed in February 1978. Edwards and her father, both members of The Church of Jesus Christ of Latter-day Saints, feel the events in their parallel lives through missionary service and organ donation have simply been “meant to be.” 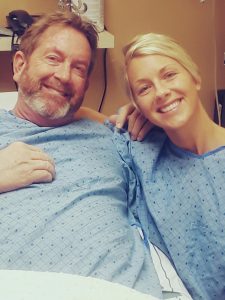 Deklerk, a West Jordan resident, was born of Holland immigrants and spoke Dutch as his first language. When he received his mission call to the Japan Sapporo Mission, he said he was shocked to find out he would serve in a Japanese-speaking location instead of using his native tongue. He left for the mission field in January 1977.

Elder Rob Deklerk stands in front of an LDS chapel in Japan with two church members to whom he taught the gospel. He served in the Japan Sapporo mission from 1977-1979.

A little over a year into his mission, Deklerk got sick. He frequently fainted and was urinating black, and soon discovered he was facing serious kidney problems. His mission president, Shozo Suzuki, sent him home to California for treatment.

Before he returned home, Deklerk remembers receiving a blessing from Elder Yoshihiko Kikuchi, who was then a member of the First Quorum of the Seventy, and President Suzuki. In the blessing, Deklerk was given a promise: “If I was true and faithful to my mission and my calling, I would come back.”

Deklerk had surgery to remove his right kidney and lived at home with his family while he recovered. During that time, LDS Church headquarters called him about being released as a missionary. But Deklerk didn’t want to end his full-time service. He then got another call that said he could return to the mission field and serve in Anaheim, California, as it was close to his home and hospital.

“I said no. I was pretty stubborn,” Deklerk said, clinging to the promise he made to be true and faithful so he could return to Japan.

Church headquarters called again, but this time, an unexpected voice was on the other line — it was President Spencer W. Kimball, who was then serving as the twelfth president of the LDS Church.

“President Kimball came on the line and said, ‘Do you want to go back to your mission?’” Deklerk recalls. “Yes, I do. I was told that,” Deklerk replied. Deklerk remembers the then-church president responding, “I feel the same.” He was on a plane back to Japan three weeks later.

When Deklerk returned to his mission in March 1978, he felt as if “everything opened up.” His Japanese was strong, the Spirit was strong and teaching became easy to him, he said.

“I felt like I was wanted and that I was part of the mission field. I feel as if he (President Kimball) knew that I should finish what I was called to do … even 40 years later, I get emotional when I talk about it,” said Deklerk, as he remembers the five more people he baptized before going home the following January.

Deklerk said this feeling was confirmed to him again when he saw President Kimball in the Los Angeles Temple while he was serving as a temple worker after his mission.

“I was in a solemn assembly and there was President Kimball, so we all stood up while he was exiting. He looked straight at my face and said, ‘Elder Deklerk, how are you feeling?’ He knew me. It was really cool,” Deklerk recalls.

Deklerk continued to see blessings from his mission as one of the families he baptized during the year after his surgery came to California. Deklerk was the only one serving at the temple at the time who could translate in Japanese, so he was able to bring the family through the veil.

“I was meant to go back. The Lord wanted me to go back,” he said.

Following in her father’s footsteps

Deklerk’s daughter and kidney donor, Madalyn Edwards, 24, said she initially didn’t want to serve a mission even though the patriarchal blessing she received at age 16 mentioned she would. When the missionary age was lowered from 21 to 19 for sisters, Edwards felt it was her answer and submitted her papers.

“When I opened my call, my dad was the first one I looked at and he was just bawling,” Edwards said. “I grew up hearing about his mission and how amazing it was, and I always thought when I was a little girl how crazy it was that my dad served in Japan. And then I got called to Japan. … I just knew it was all because it was God’s plan to serve in the same country.”

Sister Madalyn Deklerk (right) served in the Japan Kobe Mission from May 2013 to December 2014. She is pictured with her companion and three converts on their baptism day.

Edwards left for the Japan Kobe Mission in May 2013. Her father was working at the Missionary Training Center at the time as an investigator in the Japanese Teaching Resource Center, a hands-on teaching experience for missionaries with outside people. Every Saturday in TRC, Edwards said, her dad got to teach her a little bit of Japanese and what to expect in the mission field.

Though they had always been close, Edwards’ connection to her dad grew even deeper throughout her mission.

“I became more understanding of my dad and more grateful for his role in my life because he was always the big spiritual giant in my family and especially my life. He was always one who said he would die for the gospel,” she said. “Serving a mission and serving where he served, I understood where he was coming from.”

Rob Deklerk returned to Japan in December 2014 with his wife Margaret to pick up Madalyn (right) from her mission.

Deklerk and his wife returned to Japan in December 2014 when Edwards finished her mission. Their missionary experiences came full circle as Deklerk met people in the branch his daughter was serving in who knew his companions, his mission president and the people he had baptized.

“It’s extremely special and heartfelt,” Deklerk said. “The connection between my daughter and with her going on a mission to Japan and speaking the same language. It’s a special, special connection that’s hard to describe.”

It was this “special connection” that would soon prompt Edwards to be the one to save her father’s life.

Deklerk, now 60, said “his warranty wore out” on his second kidney about three years ago. His kidney function continued to drop and he had been on dialysis for about five months. The Deklerk family knew receiving a kidney transplant was a long and complicated process.

Edwards, a yoga instructor, held donation-based yoga classes and raised about $1,000 for her father. She wanted to be a match but her first test failed, as she had just run a marathon and had a significant amount of protein in her urine.

She felt she needed to be tested again, and this time, her test was clean. Edwards said she relied on her patriarchal blessing in which she was told she would be able to return all the love her parents had given her. This was her opportunity to do that, she thought.

But the complicated process would continue. At the end of January, Edwards went in for a pre-op and doctors found another spike of protein. The surgery was postponed. Doctors said if the protein got worse, they would need to do a biopsy to make sure it wasn’t a more serious problem like cancer.

“I was terrified and I was sobbing,” Edwards said as she became frustrated and depressed. “In the beginning I blamed God. I thought ‘Why would you do this?’ and I got angry. And that’s not like me. I never blame him for anything.”

She then had an experience at church with her family that helped change her perspective. Edwards and several others in the congregation were fasting for her dad and her mom asked her to stand up and share her experience.

“While I was standing there, bearing my testimony, I felt in my heart like this was a test,” she said. “What I heard in my heart was, “I hear you, but do you hear me?” And it was in that moment, I thought, ‘OK, I hear you. I get it and thank you for this trial and test of faith because now I’m really prepared.’”

Edwards received a call the next day that her test was clean and the surgery was scheduled for the following week. Edwards and Deklerk went in for surgery at Intermountain Medical Center in Murray, Utah, on Feb. 13. The transplant was successful.

“The doctors told us it was like my kidney was made for his body because all the blood vessels and everything fit perfectly,” Edwards said after the surgery. “His body accepted my kidney right away. They were afraid about putting a female kidney into a male because sometimes it’s too small, but nope. Mine was nice and big and it fit perfect.”

Deklerk was able to walk the same day as his transplant. His kidney function was at 7 percent prior to surgery and jumped to 51 percent post-transplant, said Wendy Stapley, kidney transplant coordinator with the Intermountain Medical Center Transplant Program. She said this number may continue to improve as he heals.

Madalyn Edwards and her husband (left) sit next to Rob Deklerk and his wife Margaret (right) in Deklerk’s hospital room prior to the surgery on Feb. 13, 2018.

Stapley watched as Deklerk and Edwards relied on each other throughout the transplant process and surgery.

“Rob (Deklerk) was in her room a lot just being supportive and helping her, trying to get her up and get her moving,” Stapley said. “It was fun to see. They have a great relationship and a good family dynamic amongst all of them.”

4comments on this story

Edwards said it’s been incredible to see how her dad walks normal and doesn’t have pain in his back and knees like he did prior to the transplant. Though her recovery has been tougher, she said “everything has been worth it, to see my dad as he is.”

Deklerk is grateful for her daughter’s sacrifice.

“It’s a miracle. It’s awesome. Everything over the last 40 years has just kind of fit,” Deklerk said. “It was all meant to be. At least I can be on this earth a little while longer.” 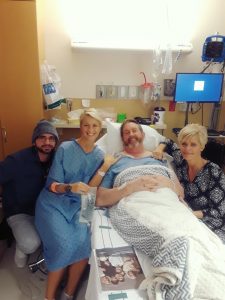 Thank you for helping me with my car March is Kidney Month in Utah & Idaho — so donate your car to Kidney...
Scroll to top