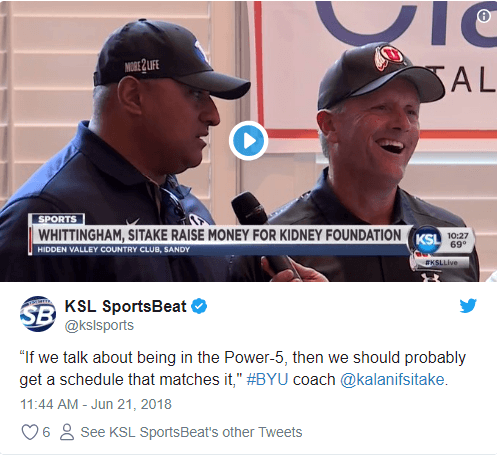 For 29 years, the coaching staffs at BYU and Utah have come together in June to support the National Kidney Foundation of Utah and Idaho for a charity golf event raising thousands of dollars annually for the publicly funded nonprofit organization.

But with new NCAA legislation extending the recruiting period into June and both schools offering seven-on-seven camps deep into the summer, both BYU coach Kalani Sitake and Utah’s Kyle Whittingham had plenty of conflicts.

Neither one of them wanted to miss the event Monday, though — Sitake even got a speeding ticket as he drove from Provo to Hidden Valley County Club in Sandy to arrive in time for the annual luncheon.

Monday’s luncheon was appointment viewing for Whittingham, too. Even without the obligation of the losing coach singing the opposing school’s fight song.

“June is a lot more busy for coaches than it used to be, with the satellite camps and more official visits in June,” he said. “It’s a lot different than it once was, but I just have to make time for this.”

The event began with legendary BYU coach LaVell Edwards and has brought together every coach in the rivalry since, including Utah’s Ron McBride — still seated at the center table, across from Sitake and next to former BYU and NFL tight end Chad Lewis.

To Sitake’s right sat Whittingham, laughing like a buddy-cop duo of former coaching colleagues who played at the same school and coached together at a rival institution.

In those 29 years, the group has raised funds to help the roughly 468,000 Americans with kidney disease who are receiving dialysis treatment or the 1,316 people from Utah and Idaho currently awaiting a life-saving organ transplant.

While getting ready for a season where the Utes look to build off the only successful postseason in Pac-12 football, and as the Cougars try to turn things around from last year’s disastrous 4-9 campaign, it was good to take time away from the grind of 24/7 college football.

The rest will come soon enough.

“You go through these parts where you know it’s around the corner,” Sitake said. “The hardest part is vacation; you need to take time off. But if everything is done correctly, I think we will be ready. I’ll spend some time with the family in July, but right now, I’m pleased with how hard everyone is working — especially the players.”

Thank you Letter from Grateful Idaho Kidney Patient Coaches Kalani Sitake (BYU) and Kyle Whittingham (U OF U) help raise money for...
Scroll to top