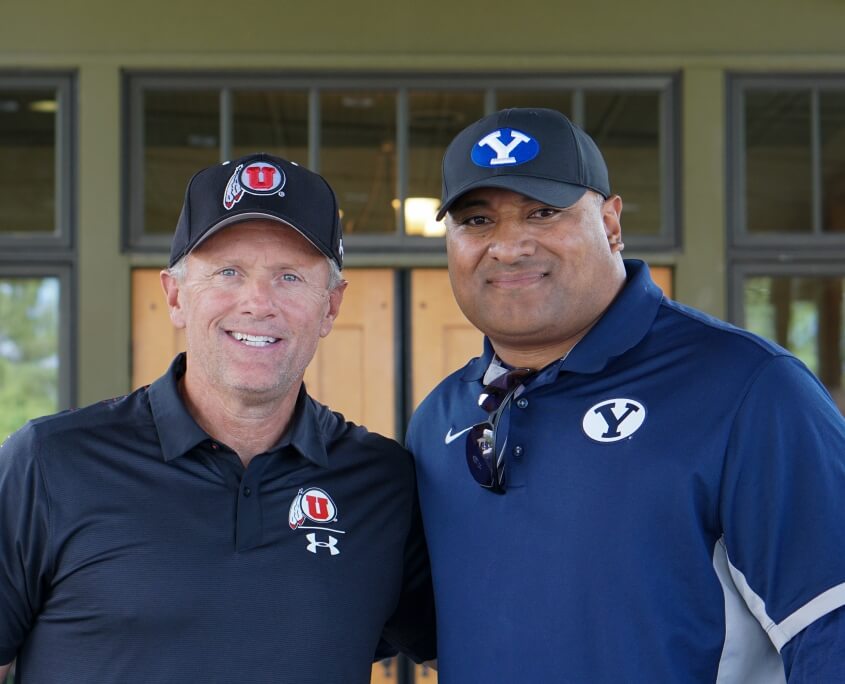 “No one in the country has had the enormous gift that we’ve had for 29 years” said Deen Vetterli, the CEO.  Ms. Vetterli started the National Kidney Foundation of Utah & Idaho in 1987 at the insistence of her Sister Glenna Shapiro (the Then CEO of the Arizona Kidney Foundation).  In 1986 Senator Jake Garn gave his kidney to his daughter Susan, and then flew into space to orbit the earth in a spaceship with just one kidney.  It was auspicious timing as the science of living kidney donation was just becoming mainstream.  After Senator Garn agreed to Chair the Board of Directors for Utah, Ms. Vetteri began thinking of ways to bring more highly visible, highly respected members of the community on Board.  Then one day, while walking through the grocery store the idea struck her.  She’d call LaVell Edwards (BYU’s then head coach of a winning football program and the cradle of two Heinemann Trophy Winners) to see what he thought of an idea for a “Rivalry For Charity Golf Tournament.”  Ms. Vetterli’s Husband, Dick Vetterli (Professor of the Political Science Department at BYU, and former BYU football quarterback) had the idea to ask the loser of the round of golf, sing the winning coaches fight song.  LaVell Edwards (for whom they eventually named the BYU Football Stadium) thought it was brilliant.  That was 29 years ago.  The rivalry started with LaVell Edwards and Ron McBride – who have been coming together to the Golf Tournament for years, until Coach Edwards passed away in 2017.  “No other Rivalry, no other State, No other NKF affiliate has enjoyed the long-standing support of the coaches like we’ve had. Kidney Patients in Utah don’t even understand what this drawn out ‘rivalry’ has meant to their cause.”  Through the years, as the coaches, and conferences have changed so had the flavor and pitch of the rivalry has shifted to something that looks more like camaraderie and good sportsmanship. Though BYU and U of U have different goals, both coaches Sitake and Whittingham are undoubtedly two of Utah’s greatest humanitarians, offering their high status, celebrated positions and the public’s love of football,  to draw awareness to the plight of Utah & Idaho patients with kidney disease and those who still need a kidney transplant.  The National Kidney Foundation of Utah & Idaho, throughout the years has relied upon the good will of Utah’s big hearted, high status champions.  We Thank Coach Sitake and Coach Whittingham for taking time out of their incredibly busy June Schedules to join us each year to play golf, raise money and bring awareness to our mission.  More people die of kidney disease than breast or prostate cancer, one in  eight Americans is affected by kidney disease, (at the time of this writing) 20 people die each awaiting a kidney transplant.  Please, consider becoming an organ donor. But in the meantime, donate a car to Kidney Kars, or support other efforts like the Kidney Walk or Kidney Golf Tournament to help lighten the burden and improve the quality of life for Utah dialysis and transplant patients.