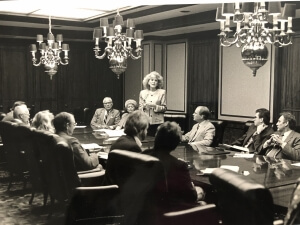 Deen Vetterli Conducts one of the first NKF of Utah Board Meetings, 1987

January 24th marks the birthday of Deen Vetterli, the Founder and CEO of the National Kidney Foundation of Utah & Idaho.  She single-handedly organized and laid the foundation for one of the  most respected and successful charity operations in the country today.  If you thought her amazing hair was big (in 1987, see photo), you should see her heart.  In honor of Ms. Vetterli’s birthday, we thought we’d reflect on her incredible achievements during 33 years of humanitarian service.  Ms. Vetterli’s sister Glenna Jones Shapiro (who was running the National Kidney Foundation of Arizona) called and suggested Deen take over the fledgling charter in Utah.  It had been organized into a small but passionate group of doctors, researchers, and others associated with the Division of Nephrology at the University of Utah and the Kolff Dialysis Center.  Fortunately for the fledgling organization, Deen had recently moved from Pasadena California and was struggling to shift gears from her successful career as a highly respected California Educator (and winner of The Valley Forge Freedom Award,  for writing American History Curriculum that is still used today in the Pasadena and California School Districts) to a ‘Utah woman.’  Deen came to Utah on the heels of many years as a Conservative Political Activist and Daughter of the American Revolution; and she was desperate for a real challenge in the Beehive State.  Deen soon learned from a family friend, Sentaor Orrin Hatch that the other sitting US Utah Senator,  Jake E. Garn , had recently given his kidney to his daughter Susan. Senator Garn had been Navy Pilot, a distinguished Mayor of Salt Lake City, and had recently flown around the earth a few times on a NASA space mission. Deen immediately recognized the position Senator Garn held in the community as one that would forever change Utah’s perception and knowledge of both kidney disease and living organ donation.  Ms. Vetterli set about creating The Gift of Life Gala, honoring Senator Garn’s “gift of life” to his daugther.  That was 1987.  She wrote hundreds (maybe a thousands) of letters and made calls from her bedroom office, with little or no assistance to pull off one of the most successful Gala events, not just in Utah, but in the country. She often laughs that the first letters were actually type-written on mimeograph paper for replication.  Sitting on the floor of her bedroom she spoke on the phone with the astronaut John Glenn and (then) President Ronald Regan’s offices asking for their support. No celebrity, politician or community leader was safe; and NO ONE dared say no.   Many of Utah’s highest ranking businessmen, have joked Deen Vetterli is a ‘Tiger-Lady’ and knew from experience that it was easier to do what she was asking, than to say ‘no.’  With that focus and drive, Deen put together a Board of Directors unlike any other in the United States. It is who’s who list of Governors, Senators, local celebrities, community leaders, Head Football coaches, and leading kidney doctors. The picture above was taken at one of those meetings; and as the viewer can see, she is a commanding presence in that space. She was a woman on a mission to save lives.

The Gala for Senator Garn was a smashing success, but she did not stop there. Other noteworthy Gift of Life Gala Honorees were: Senator Orrin Hatch, Dr. LaVell Edwards (Head Coach of BYU Football), Ed Garrison (CEO of the space program at Morton/Thiokol), Dr. Willem J. Kolff (creator of the dialysis machine), James (Jamie) Redford, and many others.  Not to be one to rest on her laurels,  Deen went on to create one of Utah’s  most well known, and beloved golf tournament traditions in the history of Utah.  She earned the support of the head football coaches of the University of Utah and the BYU (at the time, it was a bitter, blood thirsty rivalry between the two schools). The coaches “Rivalry For Charity Golf Tournament”  is still the highlight of the Charity Golf season, 31 years later. She has tirelessly sought support from the Utah public by instigating one of the country’s first ever ‘Cars for Charity’ programs and named it Kidney Kars — with a “K” like Kidney. Which, consequently, is when I came into the picture to witness and assist this tour de force of a woman.  Under Deen’s precise focus (and through her personal experience, as the daughter of the Jones Car Dealership Empire in Arizona) she created the Kidney Kars program.  To this day, Kidney Kars of Utah is one of the country’s most original, successful, and highly respected car-for-charity donation programs.  Kidney Kars donation income has sustained tens of thousands of Utah kidney patients, making tens of millions of dollars available to the mission of the National Kidney Foundation of Utah & Idaho for: medical/financial patient aid, local medical research, the promotion of organ donation and kidney disease awareness.  She has worked in coalition with other organizations to promote oran donation.  Those Utahns, who unfortunate enough to live with kidney disease, have a great champion in Deen Vetterli. Her greatest treasure are the cards and small thank you letters from those who have been on the receiving end of the programs of the NKF of Utah & Idaho. She asks her staff to read them and contemplate the mission of the organization in order to do their best job on their behalf. Deen sometimes weeps reading the letters of gratitude from those who have attended the kidney camps (for transplanted children and of the families affected by kidney disease). Her gratitude to have meaningful work and her dedication to the success of her staff is a testament to her desire to serve this population. Her drive to help others is unparalleled.

As a young college graduate in 1991, I came to work for Deen at the NKF of Utah to help run the Kidney Kars program.  One day,  Deen called me into her office to relay that a close friend, serving as an Ambassador to Russia in Vladivostok, had called to ask if she would help a young Russian boy get treatment for kidney failure somewhere in Utah. She asked for my suggestions.  Instead, I asked “if we help this one young man, who else will we have to help? Where will it end?”  Deen simply looked at me, put her hand over mine and and asked “When someone asks you to help save someone’s life, and you have the power to do that– what would you do?  I don’t know about you, but that’s exactly what I’m going to do.”  Deen’s certainty about saving one life, sank into my heart. As the saying goes “For whosoever saves a life, saves the world.”  In that moment, I decided I wanted to be on this woman’s team for as long as she’d let me stay.

What a debt of gratitude, we owe Deen Vetterli for putting her drive for success, and ability to teach and lead, for the service of our fellow Utahns (and now Idahoans) in need because of kidney disease. We live in a state where living donation is common, and where every single Utah citizen is willing to donate a car to Kidney Kars to share the burden of their friends and neighbors on dialysis or in need of a kidney transplant.

Happy Birthday to one of Utah’s most astonishing women, Deen Vetterli.

Who, I might add, is going to kill me if she ever reads this. 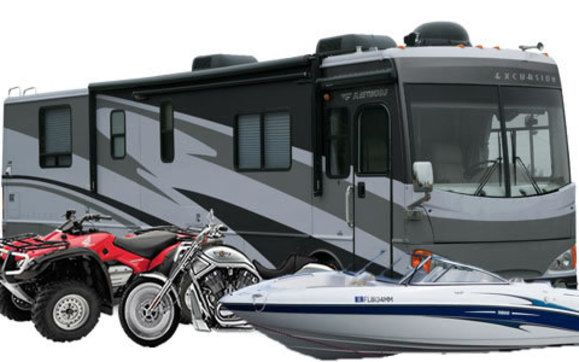 We do NOT offer free towing for any vehicle other than passenger cars and trucks.

So yes, we can accept them if you’re willing to deliver your donation to a location in (North) Salt Lake City.

We do take motorhomes, trailers, boats, wave runners, snow machines, school buses, box trucks, cargo vans, cherry pickers, road pavers (and alot of other things). But these types of items must be delivered by the donor.

So, if you can deliver the recreational vehicle or equipment yourself, then go ahead and submit the donation to www.towKars.org and using the appropriate (car, boat, RV, or motorcycle) sections of the www.towKars.org website. If you check the box asking if you are willing to the donated item, it will allow you to continue the submission.
If you do NOT check the box acknowledging that will deliver the item, the website will NOT allow you to submit or continue the donation.

If you have questions about donating anything other than a car (and you believe the item to be valued at $1,000 or more) please call the National Kidney Foundation of Utah office for more details.

You can call 9-5/M-F (801) 226-5111 to discuss the details about donating a boat, motorhome, trailer, wave runner, snow machine, or any recreation vehicle or any other machinery.